It was a fantastic day, sun shining and plenty of support from the Hornby supporters and we were in for an exciting game ahead .......
1st Quarter: Hornby gain the lead first but Technical quickly come back into the game ....
2nd Quarter: Going goal for goal by the time half was upon both teams the game was all tied up 15 all ...
3rd Quarter: Still in a battle of goal for goal with neither team giving into the other, but Hornby lead by 2 going into the last quarter..
4th Quarter: With 2 goals up and not prepared to loose Hornby played to their fullest potential but a couple of critical turnover balls and Technical came through to WIN the Final  31 / 26.

We congratulate the following teams that have made it through to Semi-Finals for the 2012 season: U12L, U12N, U14I, U16G and Social D 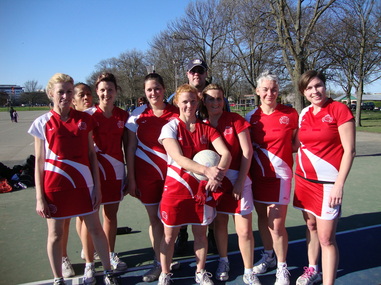 Emily Narawa, Grace O'Loughlin and Sheridan Lithgow for making the U14 Development Representative Teams for Christchurch Netball Centre 2012.
Our club is very proud of the way you trialed and conducted yourself at the trials.
Well Done Girls.

Lilly Savea, Grace O'Loughlin and Abbey Stokes for making the Canterbury Primary Schools Representative Teams for 2012.
Our club is very proud of the way you trialed and conducted yourself at the trials.
Well Done Girls.

Our Shelz !!
Senior A Coach 2013 Season
This season our club has secured Shelley Norris  ( Canterbury A NPC Team player 2011) as our Coach for our Senior A Team with the  support of Air Rescue Services Trust.

We thank them for their support.