Passing of a larger than life Club Member 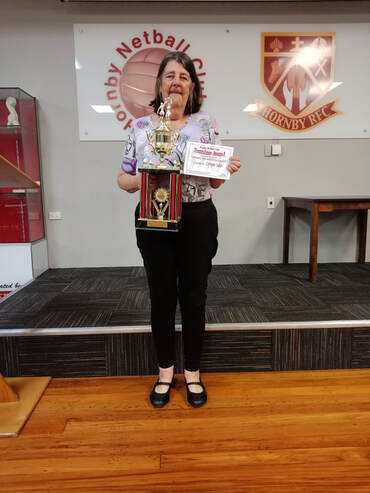 2019 - Lorraine receives the Founders Trophy. Awarded in the Spirit of Community, Dedication and Encouragement
Lorraine Salter
14th January 2020
(written by Krissy Newton - Halswell Club and Lynlea Willan - HNC)
​
​Halswell Netball Club, in conjunction with Hornby Netball Club, applied for a plaque to be placed at the memorial garden at the Christchurch Netball Centre in recognition of Lorraine Salter who passed away January 21st 2020.

Lorraine, along with her daughter Aimee, joined the Halswell Netball Club in 2008 – Aimee as a player and Lorraine as a Manager (2010-2017 Manager of Aimee’s team).  In 2014, Lorraine (along with Aimee) took over the organising of the clubs’ uniforms and equipment and she officially joined the committee in 2014 where she took over as treasurer of the club where she remained until her departure in 2017.

During Lorraine’s time at Halswell, whether it was supporting the various teams or organising social events, everyone knew who she was.  She was a force to be reckoned with and always told you how it was and she was such an asset to us on the committee, as both a committee member and valued member of the club.


​
In 2018, Lorraine and Aimee left Halswell and moved to Hornby Netball Club where Lorraine again took up the Managers’ role of Aimee’s team (Senior B team) and she continued in this role in 2019.  Lorraine took over the two major fundraisers for the club in organising the quiz night and cheese roll fundraiser. We nic named her the "Cheese Roll Queen" as she did such an awesome job at this.

We have fond memories of Lorraine bringing us coffee early every Saturday morning and making sure that we were set for the day and always asking if there was anything that she could  help with.  She would stay at the courts all day supporting Aimee and the various club teams.  Lorraine not only was a huge support on a Saturday to all teams but when Halswell A made the premier grade, she would attend the Tuesday night games as well.

The majority of Lorraine’s life was spent down at the Hagley Netball Courts, so we are pleased that Lorraine will be remembered down at the courts where she was always supporting the many teams and clubs she had been involved with.

As netball was her and Aimee's passion, we know that one day Lorraine will be looking down on Aimee playing on Centre Court.

Lorraine from our heart to yours - you sure will be missed.